Wasps are aggressive cousins of bees. They are divergent species that often mimic other insects like bees to cause confusion to their prey, the bees. There are over 20 thousand different species of wasp in the world and only some of those are native to North America. Unlike a bee, which dies after it stings, wasps can string repeatedly. Females wasps are the ones that do the stinging though, the men just bite. It is also important to know that people die each year from allergic reactions to wasp stings. This is a serious issue and if you do not know if you are allergic you could risk your life every day you pass a wasp nest. Wasps are very aggressive. More so than most other species in the world. They are territorial and will kill just about anything that enters its nesting area. While it may not be able to kill humans with one sting they will swarm and sting humans hundreds of times if they disturb their nest. This is why wasp removal is so important. If you have a wasp nest on your property then you have a life-threatening danger near your home and you will either have to deal with it yourself or call the professionals to remove it and take it away. So what kinds of wasps are there in the world and which ones are more likely to attack? Not all wasps are interested in protecting their territory to the point that they would instantly attack you but some species do exactly that.

The yellow jacket. What a name, right? Already terrifying. They get their name from their species imitation of stripped bees. Their lines are more chaotic but people often mistake them for bees, only to be stung multiple times and realize it was a wasp. They show up in late summer and are attracted by the smell of food. So picnics and BBQs are a big draw for them. Before this, during the spring and early summer, they are busy hunting insects to feed to the larva. However, when the summer comes to a close the wasp workers have nothing to do but find sugary things which is why they start bothering us. 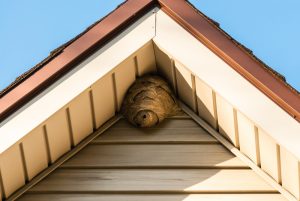 They build nests in places they feel most safe, under awnings and in trees and bushes. They don’t like to be too open to attack. These wasps are aggressive as heck. Their nests often have four to five thousand wasps and they will all come out and attack you at once if they think you are threatening their nest. So stay well away from the nest when trying to handle it. The nest may also be very high up on your roof or in a tree. If the nest cannot be deal with and is too high to reach and too expensive to remove you can make or purchase wasp traps. They are very efficient and will capture the wasps that come near your home. However, this will leave the nest active until the winter when new queens are born. They may decide to use the same nest again and expand on it. This can happen which is why it’s important to remove dead nests. If you have an accessible wasp nest that you want to kill then you can do it at night. Wasps, like many insects, are day-light creatures that go to sleep at night. That means the nest is quiet and full of wasps until morning. You can take two big cans of wasp poison and spray them both simultaneously into the nest until the cans are empty. Then leave the nest for a week or two and remove it. If you see any wasps on the property after that then they were not in the nest and can be killed with traps.